Chapter 3 - The Definition of the word "Holy "

Summary: The tabernacle, the priesthood and Israel's special place in God's dealings are all pictures of holiness. A study of these pictures can help us to get a grasp on why God's Spirit is called "Holy". This message is accompanied by a PDF chart: "Pictures of Holiness - Israel and the Tabernacle".
As mentioned in chapter 2, an often overlooked step in gaining some sort of understanding of the Holy Spirit is becoming familiar with what the two words in the name actually mean. – “Holy” and “Spirit”. Having considered something of the word "spirit" in the previous chapter, I’d like us to now spend some time thinking about what is meant by the word “holy”.

To the world, something that is holy is religious or pious in nature, perhaps with an air of loftiness or mystique about it. Many master painters in bygone centuries depicted holiness by brushing a mysterious glow or a halo. However, the Scriptures paint a slightly different picture.

In its simplest definition, the Biblical idea is that "holy" means “separate”, and holiness is the idea of being separated. When the Bible speaks of someone or something being holy, that person or object is in some way separated FROM the things of the world. Not only that though; they are then separated UNTO God. It is a twofold action. A person can distance themselves from their family or neighbours, but not be considered holy in the sense portrayed by Scripture. Likewise, an item may be placed outside of a house, away from everything else, but not be holy either. This is because separation FROM something is only half the picture. It is separation UNTO God that completes the process of holiness, as we shall see.

To help demonstrate the meaning of the word "holy" further, let us take a look at two of the pictures the Lord has provided for us in His Word - namely, Israel and the Tabernacle.


Israel as a picture of holiness

For the purpose of the next section, I have adapted a chart originally drawn by Charles H. Welch (found in his "Alphabetical Analysis" Part 6, p.275, under the article heading of "Holiness"). I openly acknowledge to the reader that I have altered some of the details from the original chart in order to illustrate several particular points in this chapter. Mr. Welch depicted the concept so well, that I did not wish to depart too far from his drawing. Ultimately, though, I believe the general ideas contained in the original chart have been preserved. 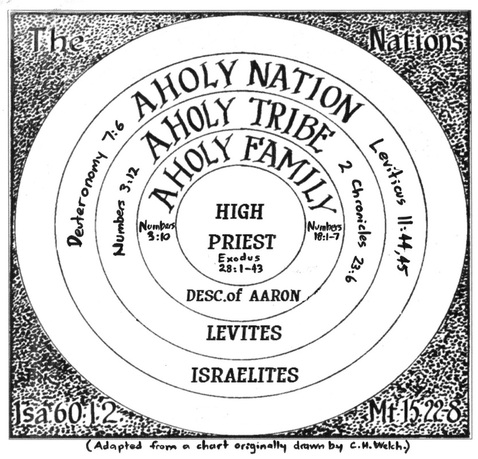 The structure of the nation of Israel, as ordained by God in the Mosaic Law, presents a lovely picture of holiness.

[Regarding other nations, such as the Hittites, Girgashites, Amorites, Canaanites, etc.] You shall make no covenant with them ... nor shall you make marriages with them ... for you are a holy people to the LORD your God; the LORD your God has chosen you to be a people for Himself, a special treasure above all peoples on the face of the earth. (Deuteronomy 7:1-6)

Notice the twofold aspect of holiness here: Israelites were to separate themselves from entering into contracts with these other nations, because Israel was God's chosen people. Israelites were separate from other nations, and separated unto God. Hence, the instruction to them to "be holy, for I am holy" (Leviticus 11:44,45; also 19:2).

Within that holy nation, there was a holy tribe - the Levites. They were separated from the rest of the nation, and separated unto God for particular service.

Bring the tribe of Levi near, and present them before Aaron the priest, that they may serve him. And they shall attend to his needs and the needs of the whole congregation be fore the tabernacle of meeting, to do the work of the tabernacle ... Now, behold, I Myself have taken the Levites from among the children of Israel ... the Levites shall be Mine. (Numbers 3:6,7,12)

Let no one come into the house of the LORD except the priests and those of the Levites who serve. They may go in for they are holy. (2 Chronicles 23:6)

The holiness of God was not to be compromised by those not separated for service to the LORD. The God-ordained penalty for breaching this was death, and we get some idea of how seriously God viewed this. Even the rest of the also "holy" nation of Israel
were not permitted to partake in the roles set aside for the Levites.

Aaron and descendants - a holy family

The LORD said to Aaron, "You and your sons and your father's house with you shall bear the iniquity related to the sanctuary
, and you and your sons with you shall bear the iniquity associated with your priesthood. Also bring with you your brethren of the tribe of Levi ... they shall attend to your needs and all the needs of the tabernacle; but they shall not come near the articles of the sanctuary and the altar, lest they die ..." (Numbers 18:1-3)

Aaron and descendants were to be holy servants for the Holy Place. The rest of the Levites, though also designated as "holy", were, in one sense "not as holy" as Aaron's family who alone were to minister and attend to the articles inside the tabernacle.

The high priest, from the family of Aaron's descendants, was a most sacred and holy position among the people.

Now take Aaron your brother, and his sons with him, from among the children of Israel, that he may minister to Me as priest (Exodus 28:1)

He who is the high priest among his brethren, on whose head the anointing oil was poured and who is consecrated to wear the garments ... (Leviticus 21:10)

"You shall also make a plate of pure gold and engrave on it, [like] the engraving of a signet: HOLINESS TO THE LORD. And you shall put it on a blue cord, that it may be on the turban; it shall be on the front of the turban. So it shall be on Aaron's forehead, that Aaron may bear the iniquity of the holy things which the children of Israel hallow in all their holy gifts; and it shall always be on his forehead, that they may be accepted before the LORD.  (Exodus 28:36-38)

Once a year, the high priest had to prepare himself as he made atonement for the people before the Lord in the Holy of Holies (or "Most Holy Place").

All of these rituals had to be carried out in the prescribed manner, otherwise, in many instances, the high priest would be killed. God took His holiness very seriously.


The Tabernacle as a picture of holiness

This next picture of holiness that we will look at overlaps some of what we have just read, but it is, nevertheless, a different picture, and one worthy of our attention. 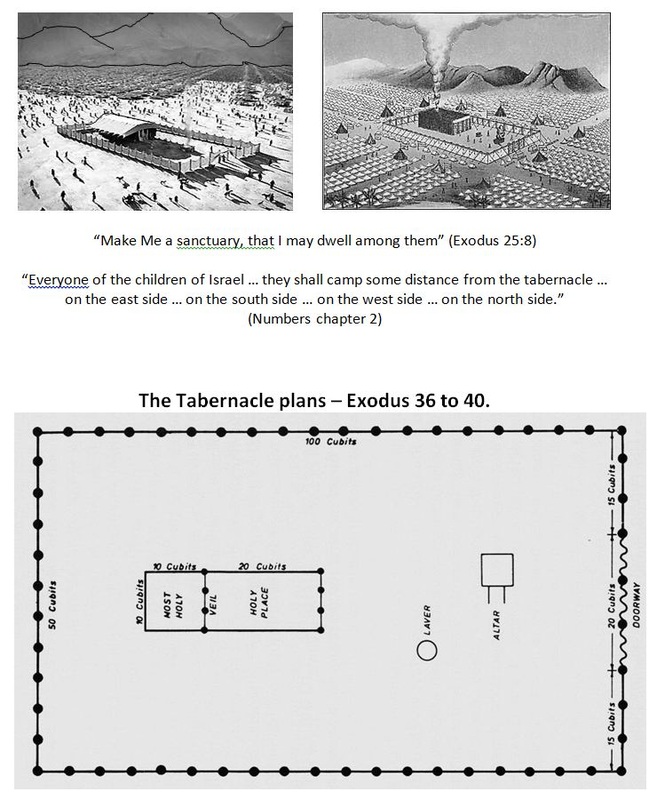 Some of what we read about the tabernacle also applies to the temple, which was really a more permanent version of the tabernacle.

During the exodus journey, when the people set up camp, the tabernacle was to be in the centre of their encampment, but there was to be a distance between the tabernacle and the closest tents. Except for the purpose of coming to offer sacrifices, the tabernacle was off limits to most of the people, but the people would be able to see the pillar of cloud by day and fire by night. Amongst other purposes, this was a signal to the nation, who were mostly kept at some distance from the tabernacle, that God was in their midst. The two hand-drawn pictures of the tabernacle on this page are both accurate, but contain inaccuracies, so I've included both, in order to get the best out of each of them!

The picture on the left depicts that the rest of the nation did not set up too closely to the tabernacle; the picture on the right portrays the pillar of cloud that would have been visible even from the farthest reaches of the camp.

When the LORD first speaks to Moses about a tabernacle (sometimes called a "sanctuary"), He immediately makes the intent known  - "that I may dwell among them [i.e. the nation of Israel] (Exodus 25:8). It may seem a paradox to us, but God establishes a dwelling place for Himself in their midst ... but then keeps most people away from it!

It is actually quite a moving picture of God's love for His people. He loves those whom He calls His own so much that He wishes to dwell among them. However, at the same time, He will not tolerate His holiness (sanctity, purity, etc) being compromised.

The final illustration shows how the tabernacle stucture itself was comprised of a "holy place", and then a "most holy place" or "Holy of Holies" behind the veil. Access was granted only to a select few, only at certain times, and always under strict conditions. The sanctity of this inner area is emphasised by the instructions given to Moses and Aaron:

The LORD said to Moses: "Tell Aaron your brother not to come at just any time into the Holy Place inside the veil, before the mercy seat which is on the ark, lest he die..." (Leviticus 16:2)

Holiness permeates the laws of Exodus, Leviticus, Numbers and Deuteronomy; in fact, the majority of the Mosaic law has its focus on holiness. Being in a state considered to be holy before God, and therefore acceptable to Him, was often a complicated process involving ceremonies that most modern day Westerners find perplexing. We really have only scratched the surface of this subject in this chapter, because it can get quite overwhelming. Despite this, I find that the pictures of holiness illustrated in the nation of Israel and in the tabernacle are, at the one time, both enlightening and humbling, even if they are also confusing sometimes. It should be said that there is much to be gained from studying up on the symbolism behind the laws, but for the moment, do not lose sight of the principle that holiness is separation FROM the ordinary and common, and separation UNTO God.


What is meant by “Holy Spirit”?

In light of our study of the word "holy" in this chapter, and "spirit" in the previous chapter, what then is implied by the divine title "Holy Spirit"? Let us first remind ourselves of what each of those words mean:
Spirit = intangible force
Holy = separated from the world, separated unto God

The following verse sheds much light on this closeness:

The bond between God and His spirit is as close as the bond between a man and his own spirit. Adjusting an old proverb, we could say that "Holiness is next to Godness" in the hope of understanding a little more of "the intangible arm of God, interacting with mankind on God's behalf". In keeping with this theme then, in the next chapter, we shall see something of how the Holy Spirit is regularly equated with God and consider what might be called the deity, or perhaps the “Godness”, of the Holy Spirit.