Chapter 27 - The Disciples After Christ's Resurrection

Summary: A consideration of the period between the Lord's resurrection and the day of Pentecost in Acts 2. Map below accompanies this message. 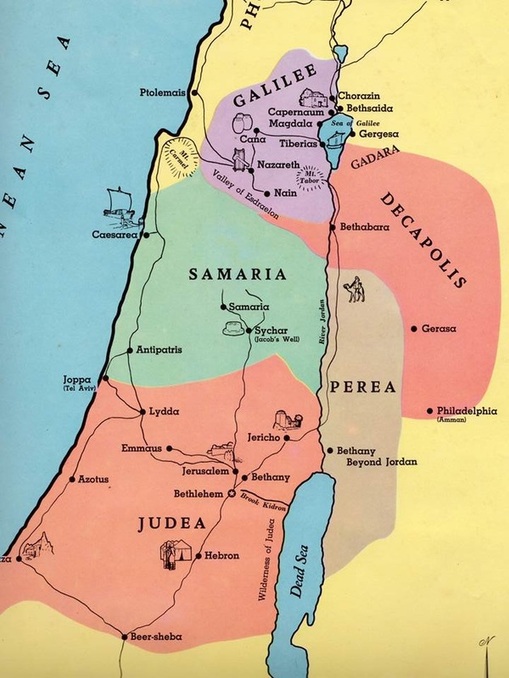 Study Notes: No.27 - The Disciples After the Lord's Resurrection
(Some of these issues are discussed in more detail in the audio recording.)

In recent studies, we’ve been looking at the Holy Spirit’s work in the lives of the twelve disciples, focusing our attention in the last study on Judas and his falling away. We compared this with the “permanency” of God’s Holy Spirit in our lives, as spoken of in Ephesians and elsewhere.

In this study, I’d like us to consider the period just after the Lord’s resurrection, but before the day of Pentecost.

The period between the Lord’s resurrection and the day of Pentecost - a period of 50 days, or just short of two months - is a most intriguing period of time, but one that is not always easy to understand. It can be quite difficult to piece together the exact sequence of events of this brief period.

The record of the crucifixion, and then some of the very first appearances of the Lord after His resurrection are all covered in chronological order by each of the four Gospel accounts. After those initial appearances, though, the four Gospels take four separate paths, each one covering different aspects and events. It can be difficult to try to follow the Spirit’s work in the lives of the disciples during this 50 day period. A few references to the Holy Spirit are made during that period, though, and I’d like us to at least look at these in this study.

I can't claim to have absolute clarity concerning the Holy Spirit’s work with the disciples during the period between the Lord’s resurrection and the day of Pentecost. We get an inkling of the Spirit's role in the lives of the disciples during those fifty days, mainly, through the words of the Lord Himself as He appeared to them. Let's begin by getting the probable sequence of events under our belts, establish a few guideposts, and then go from there.

Sequence of events after the resurrection

Not every event after the resurrection is covered in this section, just those that help us see the relationship of the Holy Spirit to the 12 disciples during this period. It will help to refer to the map of Palestine on this page, especially as we attempt to trace the movements of the Lord and the disciples between Galilee and Jerusalem.

The angel had told them that He had risen, and that He would go ahead and meet the disciples in Galilee (Matthew 28:7)
The NIV expresses this well with the use of quotation marks

READ John 20:18-20 – Mary Magdalene telling disciples; Jesus meets disciples in Jerusalem on the evening of the day He was resurrected. He met with only 10 disciples – no Judas, and no Thomas present.

- READ John 20:20-22 – “breathed on them” “Receive the Holy Spirit”
It is hard to say with certainty what took place at that moment, but here are a few possibilities.

• Perhaps this event didn’t happen on the resurrection day, but some time after? (probably still in Jerusalem.
v.30,31 is an aside to the chronology; perhaps v.20-22 is as well?)
• Perhaps they received just the authority to become His apostles (v.21“I send you” cp now called “apostles”), and the authority to make decisions (v.23), but were not yet fully empowered until Pentecost? No miracles recorded, not speaking in tongues yet – that all begins later on the day of Pentecost.
• Some have suggested that this was just a foretaste of the full experience of the Holy Spirit in their lives, yet to come at that stage?
• Some have suggested perhaps it was only a symbolic imparting of the spirit to his disciples at this time?
Perhaps a bit of each of these things?

Let's recap the sequence of events in brief, so far –
- the angel tells the women “He is risen, the disciples will see Him in Galilee”
- the Lord appears to them first in Jerusalem (not Galilee)
- The Lord breathes on the disciples (10 or 11 of them) and says “receive the Holy Spirit”


READ John 20:24 - He later appeared to them (2nd appearance) about a week later in Jerusalem (v.26), this time with Thomas there.

READ John 21:1- He appeared to them (3rd appearance) while they fishing near their home in Galilee.
- just as the angel had promised.
READ v.11-14 – fishing (i.e same event).

READ Matthew 28:16,17 they also met with the Lord on a mountain in Galilee (at least the 4th appearance)

READ Acts 1:4-9 (Read from NIV)
- He appeared to them (at least the 5th, and probably the last, appearance), in Jerusalem (v.4) near the Mt of Olives, just before the Feast of Pentecost, which was mandatory for Jewish males to attend.
v.4 - “tarry here [in Jerusalem], “wait for the promise of the Father”,
v.5 “you will be baptized with the Holy Spirit in a few days” – we’ll explore some of these thoughts further in a future study
v.8 – “power when the Holy Spirit comes upon you” – they didn’t have that power yet. No miracles are recorded during these 50 days, and they had not spoken in tongues up to this point; this all begins ten days later on the day of Pentecost.
v.9 -  He said these things and then ascended.

READ Acts 2:1-4
- About 10 days later, the day of Pentecost came, they were filled with the Holy Spirit and began to speak in tongues. More thoughts about these events in the next set of studies.

v.45 – He opened their understanding – probably another activity of God’s Spirit, in the role of being a revealer of truth - opening their eyes – cp Matthew 16:15-17 …
“whom say ye that I am?” And Simon Peter answered and said, “Thou art the Christ, the Son of the living God.” And Jesus answered and said unto him, Blessed art thou, Simon Barjona: for flesh and blood hath not revealed it unto thee, but my Father which is in heaven.

v.49 –  I send the promise of My Father, stay in Jerusalem, and you will be endued with power from on high – identical to Acts ch.1

Two aspects of interest are mentioned here – “power” and the “promise of the Father”.
Both are referring to the blessing of the Holy Spirit on the day of Pentecost (still future when the events of Luke 24 took place) … but they are not exactly synonymous terms.

The Power:
The power is that force which enabled the disciples/apostles to speak in tongues, perform miracles and other deeds beyond their usual capability. When the words of Luke 24 were spoken – the disciples performed no miracles, didn’t speak in tongues yet – that all began 10 days later on the day of Pentecost.

Promise of my Father -
Let’s read some more about the promise of the Father in a selection of verses from John chapters 14 to 16.

READ John 14:6    Starts off by speaking of the Father. In the following verses, note the link between the Father dwelling in Christ, the works which were manifested as a result, and the promise of the Holy Spirit. The Holy Spirit is the intangible arm of God Himself.
READ John 14:6-17
v.16 – another Helper/Advocate
v.17 dwells with you (future – not, as the NIV implies, current at the time)

READ John 15:26,27
v.26 – “He will testify about me” – the apostles in the Acts period preached and performed miracles in the name of the Lord Jesus, with the aid of the Holy Spirit. The Spirit’s activity through the apostles glorified the Lord Jesus Christ.
Compare this with Matthew 12:31,32 where the Lord said that blasphemy against the Son of Man would be forgiven, but blasphemy against the Holy Spirit would not be forgiven.

READ John 16:7-15
v.7 – Christ will depart from them, but will send another in His place
v.8 –roles of conviction
Suffice to say that all these activities were carried out in the Acts period in the lives  and ministries of the apostles under the influence of the Holy Spirit.

[A side point: Note v.13,14 “He” – This is quite emphatic in the Greek text of this verse, and is definitely masculine in gender. God's Spirit is not an “it”, not an inert object, but the intangible arm of God. Back to our main study ...]

Note also: v.13 – “guide”
In the OT we looked at the main roles of the Spirit being an Enabler, a Revealer of truth, and a Guide to those in positions of leadership. The same roles are seen in these passages, pertaining to the Spirit coming upon the apostles at Pentecost.
- an enabler “you will do greater works than these” John 14:12
- a revealer of truth “He will tell you things to come” John 16:14
- a guide - "guide you into all truth" John 16:13

Despite earlier being blessed with the Spirit in order to preach and perform miracles during the Gospel period, between the resurrection and the day of Pentecost 50 days later they had none of these powers. In Jerusalem, they were probably bestowed with authority to govern God’s people, but they would have to wait until the Lord had ascended and the day of Pentecost had arrived for the full enabling powers to be given to them.

In the next few studies, we will take a closer look at the role played by the Holy Spirit on the day of Pentecost in Acts 2.