Chapter 15 -  The Spirit during the Intertestamental Period & Early NT

Summary: After a lengthy period of little or no interaction of God with man via the Holy Spirit, the NT opens with a flurry of activity. This chapter is accompanied by charts. 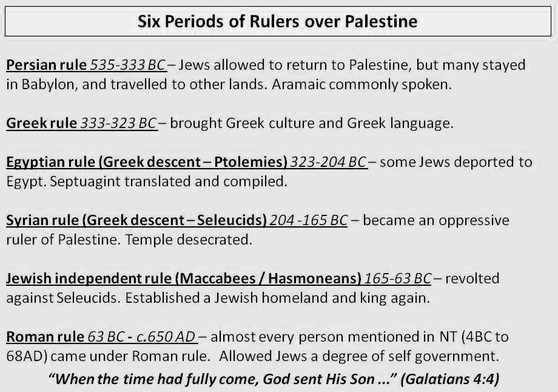 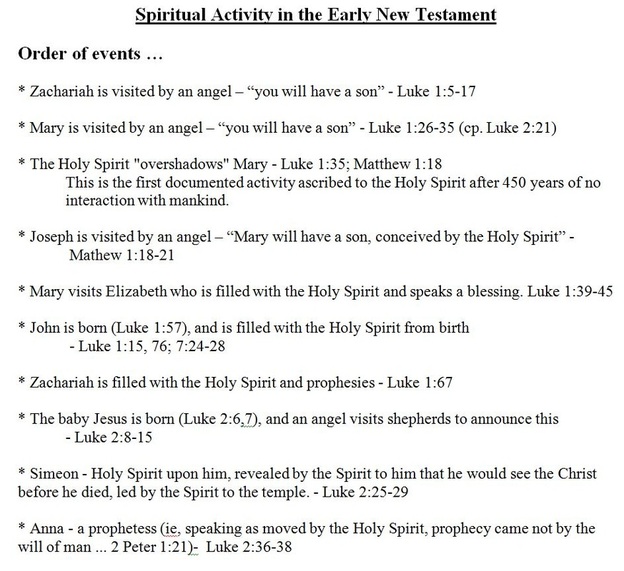 Study Notes - No.15 -  The Spirit during the Intertestamental Period & Early NT
(more detail may be found on the audio message)


In the last few studies, we’ve been considering the activities of the Holy Spirit during the Old Testament, focussing on three major roles of being an Enabler (i.e. of miracles and extraordinary deeds, interpreting of dreams, extra strength, the ability to heal and raise people from the dead, etc.), a Revealer of truth, especially via the prophets, and a Guide, especially to the judges, kings and leaders of Israel at various times.

In Haggai, Zechariah and Malachi we read how God was again interacting with mankind after the return from exile via His Spirit – via the prophets. No miracles are recorded, no instances of divine guidance upon leaders/governors – none of those other activities of the Spirit we have read about previously, with the exception of the word of the Lord to a relatively small number of prophets.
The OT writings end with the prophecies of Haggai and Zechariah around 520 BC, and Malachi around 450 BC (dates are approximate).

We’ll start this study by reading some prophecy from the last OT book.

READ Malachi 1:1 – “burden of the Lord” NIV = oracle (announcement)
(cp 2 Peter 1:21 – prophecy came not by the will of man, but holy men of God spoke as they were moved by the Holy Spirit.)

READ Malachi 3:1;  4:5,6.
- still future, even today, but these words, given by God’s Holy Spirit will come up again in our study tonight in a little while.
The last revealed words of OT times – approx 450BC.

When the NT opens about 450 years later, we again read of the Spirit’s activity in people like John the Baptist's parents, and also a few others that we will look at shortly. But what was happening in between those times? What was the Holy Spirit’s activity in the time between the end of the OT and the beginning of the NT - the period we know as the Intertestamental period?

The Holy Spirit between the Old and New Testaments

In reality, it's difficult to say with any certainty exactly what the roles and activities of God's Spirit were during the Intertestamental period, but we do have a few hints from some of the documents from this period which are not included in the Protestant Bible of 66 books.


The writings we have from the Intertestamental period do not make much mention of God's Spirit. Going back a few centuries, at one point during the time of the Judges, while Samuel was still a boy 1 Samuel 3:1 tells us that that "the word of the Lord was rare in those days". This seems to have been the case again during the Intertestamental period, leading up to the early days of the New Testament.

There are a few statements in those Intertestamental writings about how God's Spirit may or may not have been interacting with mankind at that time, and I’ll briefly mention just some of these. We should exercise caution if referring to those writings to gather theological information, as they were not inspired. However, they can at least give us an insight into what people were thinking at the time.

The general indication even from that literature is that the writers did not believe that God’s Holy Spirit was active in their lives at that time. Those writings may be categorised in two ways:

Firstly, the 12-16 books we call the apocrypha; only some are linked with the Intertestamental period. In these we see some of the ideas already expressed in the canonical OT - e.g. the Spirit's role in creation, the imparting of wisdom to people, Ezra praying that the Spirit would inspire him to write, and so on - all of which pertains to eras before the Intertestamental period anyway.

Let's have a brief look at a few examples from the First book of Maccabees (a writing of the Intertestamental period - refer to the chart above), which gives us the most definitive information of the writings from this period. Inspired or not, it clearly shows that the writer did not believe there was any prophetic activity at the time covered by those books . approx 175 BC -  approx 130 BC. A few quotes:

1 Maccabees 4:46 The altar of the temple had been desecrated by foreign powers, and when the Jews had an opportunity to set up the temple again for worship they “laid up the stones [of the desecrated altar] in the mountain of the temple in a convenient place, until there should come a prophet to shew what should be done with them.   (i.e. there was no prophet around at the time, prophets being those who were moved by the Holy Spirit to speak and write messages from God. cp. 2 Peter 1:21)

1 Maccabees 9:27 So was there a great affliction in Israel, the like whereof was not since the time that a prophet was not seen among them.   (i.e. there was no prophet around at the time)

1 Maccabees 14:41 Also that the Jews and priests were well pleased that Simon should be their governor and high priest for ever (for a long time), until there should arise a faithful prophet;   (i.e. there was no prophet around at the time)

Secondly, there are some writings found amongst the Dead Sea Scrolls in the 1940's and 50's which date from the Intertestamental period as well. Not all the Dead Sea Scrolls writings are intertestamental in date; some date from the second century, but of those from the era in question there are no claims of any significant note (in my opinion) that indicate that the writers of that time believed any extraordinary activity of the Holy Spirit was taking place. No prophets, etc. The Essene community seems to have believed that they were blessed with the Holy Spirit's presence, but the writings speaking of this belief date from well after the Intertestamental period time.

In my opinion, having looked at quite a number of the other writings of that period, there are no claims of any significance that indicate that the writers of that time believed any extraordinary activity of the Holy Spirit was taking place. Simply put, I think we can say that God was not interacting with mankind via His Holy Spirit at all during the Intertestamental period.

This is not to say, however, that God was inactive on all fronts at that time. That period set up a number of conditions that were conducive to the arrival of the Lord Jesus Christ ("when the fulness of time had come, God sent forth His Son..." Galatians 4:4) and the subsequent spread of the Gospel message during the Acts period. (e.g. the converging the family lines of Joseph and Mary, the spread of the Greek koine language, Roman peace, roads, etc). God was not inactive in working behind the scenes in the time between the testaments, but there doesn't seem to be any evidence that He was directly interacting with man via His Holy Spirit in any way during those times.

Remember, the Holy Spirit is the intangible arm of God, interacting with mankind.  During that time, there were no prophets, no visions, no inspired revelation, no divine guidance, no plainly miraculous deeds, etc.

The Holy Spirit in the Early New Testament

Coming into New Testament times, after a relatively silent period of 450 years or so, we see renewed Spiritual activity again.

Order of events (see chart), spoken of as involving some sort of spiritual activity ....

* Zachariah visited by an angel (a spirit being, but not the Holy Spirit) – “you will have a son”, READ Luke 1:5-13 (more of this passage in a few minutes)

After about 450 years of silence from God, the first signs of renewed spiritual interaction with mankind took place in the life of Zachariah, the father of John the Baptist, when he was visited by an angel in the temple. Not an open show, but quietly, privately, without public fanfare.

I think because there had been such a lengthy period without prophets, it was deemed necessary to make the proclamations about Jesus and John - the specific details of which had not been revealed in the writings of the OT -   via angels. In Scripture, angels interact with humans in the role of being messengers. Perhaps it was deemed necessary to more markedly display that these things were from God?
The announcement of these very significant events was via angels, AFTER which we then may read of the Holy Spirit’s interaction, if any, with people.

READ Matthew 1:18 - this is the first documented activity ascribed to the Holy Spirit after the 400 years of silence

* Joseph is visited by an angel - Mary will have a son, conceived by the Holy Spirit – READ Matthew 1:18-21

* Mary visits Elizabeth, who is filled with the Holy Spirit and speaks a blessing READ Luke 1:39-42   (Elizabeth did not receive a visitation from an angel, but heard the message from her husband Zachariah, who HAD been visited by an angel)

* Zachariah is filled with the Holy Spirit and prophesies - Luke 1:67

So, this study should be a reminder that the Holy Spirit’s activities vary from age to age. We’ve seen how there was a long period of little or no interaction of God with man via the Holy Spirit for 450 years during the Intertestamental Period. Then the NT begins with quite a flurry of activity  - beginning with angels delivering messages, followed by the Holy Spirit coming upon people and leading them, enabling them, and revealing things to them again, as in OT times; with the significant action of God’s Spirit overshadowing Mary, to bring about the conception of the Lord Jesus Christ.

It may come as a surprise, but, concerning spiritual interaction with mankind in the earliest times of the New Testament, there is not a word about the Holy Spirit being upon the Lord Jesus. In terms of leading Him, enabling Him, etc., there is not a word. But all this is about to change. The Gospel narratives, from this point on, tell us quite a bit about the Holy Spirit's role in the life of the Lord Jesus. More about this in the next study.