Summary: This chapter discusses the actual outpouring of the Spirit that took place on the Day of Pentecost in Acts 2. Refer to Chapters 28, 29 and 30 of this series for some background to the events discussed here. See map below for possible location. 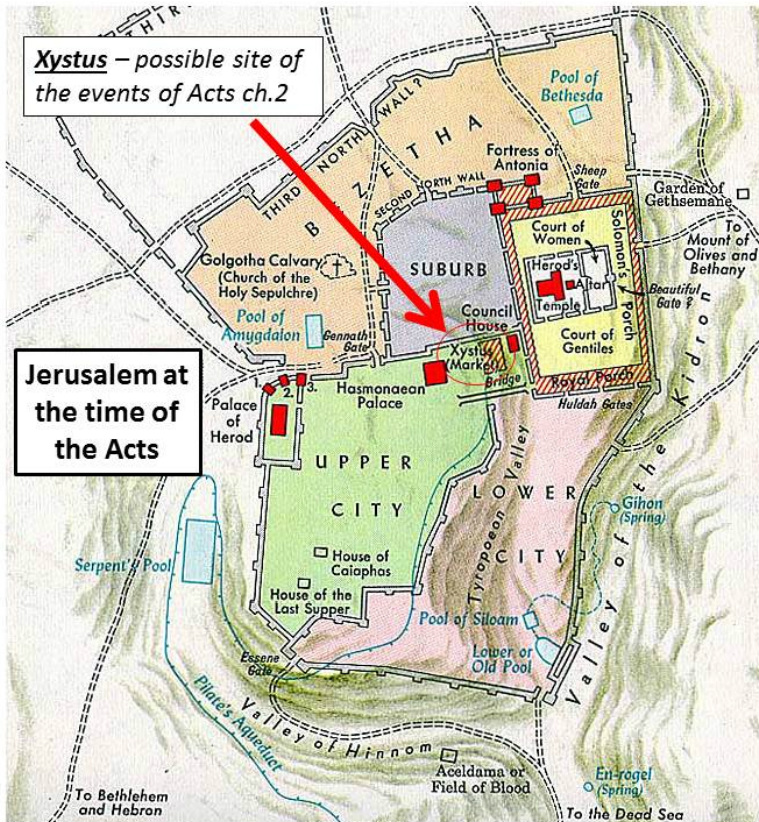 Study Notes: No.31 - Pentecost Pt 4 - The Events of Acts ch.2
(Some of these issues are discussed in more detail in the audio recording.)

This is the fourth study of four pertaining to the events of Pentecost described in Acts chapter 2, an event at which there was a great outpouring of the Holy Spirit.

Over the past three studies, we’ve been focussing on the Day of Pentecost in Acts 2. Pentecost is one of the annual Feasts or Festivals of the Lord, a harvest festival of firstfruits. Those who put their faith in the Lord Jesus as the promised Messiah on that day were a foretaste of that greater harvest, still future, when He returns and establishes His kingdom on the earth.

In the last study, we skirted through the handout ("Will You Restore The Kingdom At This Time?") and considered the apostles’ question to the Lord in Acts 1:6. I tried to demonstrate how this question about the kingdom linked up with the promise of the Holy Spirit on the day of Pentecost. In brief, the OT promises of that kingdom include promises of an outpouring of the Holy Spirit upon Israel. After the Lord had spent 40 days talking to the disciples about things pertaining to the kingdom of God, and then told them that they would soon be baptized with the Holy Spirit, their question to the Lord was, “will you set the kingdom up now?”. It was a very reasonable question.

In this study, we’ll read more about the actual outpouring of the Spirit that took place on the Day of Pentecost in Acts 2.

We’ll start by reading portions of Acts 2 to get the basic outline. We’ll skip over a number of verses from this passage, in order to focus on just a few points especially related to the work of the Holy Spirit. But be aware that this chapter is rich in teaching and prophetic fulfilment – there’s a lot more going on than we will have time to look at tonight. There’s about ten different ways we could dissect the events of this passage. We’re just going to concentrate on some verses speaking of the Spirit’s involvement.
READ 2:1-18…21-24…36-41
Let’s go back and have a closer look at some of these verses.

v.1 – not the first ever day of Pentecost, but the day of Pentecost for that year
v.1 – “they were all together” who were all together? The twelve? (1:26) or was it 120? (1:15) - it's difficult to tell. Certainly by the end of the chapter, the Holy Spirit had fallen upon each of these 120 people, included in the 3000 of v.41. It may have just been the twelve who preached (note v.7 “Galileans”), but I'm really not sure.
v.1 “in one place”  (cp v.2 “house”) Possibly the house where they had been staying  (v.13) Possibly an area within the temple precincts? Edersheim – may have taken place in an  enclosed, public area just west of the Temple precincts; perhaps a covered marketplace  called the Xystus (some of this is based on “Temple” p.11). Note the map of Jerusalem accompanying this study.
Wherever they were, there were a lot of people nearby. Pentecost was, among other things, a day of sacred assembly, and the Temple would have been the centre of this assembly. When the sound of the wind came, a multitude was close enough to hear it and gather.

v.2 -  A sound like rushing wind; I think this was the sound that drew the multitude together (not the sound of people speaking in multiple languages)
Compare this with John 3:8-10 –  there are similar thoughts here of the wind, the sound it makes, and the coming of the Holy Spirit upon an Israelite believer.

v.4 filled with the Holy Spirit (more about this phrase later)

The work of the Spirit in the Scriptures will vary. The gift of tongues given at Acts 2 had a context – v.8-11 – it was so that dispersed Jews could understand. Pentecost was one of the three annual festivals requiring attendance – dispersed Jews included. Many Jews in attendance could only speak the languages of the places they had come from, and not be able to speak the local tongue (probably Aramaic).

v.4 – “utterance” / “as the Spirit enabled them” - Greek = (apophtheggomai)
an unusual word, and it occurs only a few times - 2:4 (here); 2:14 (below)
Emphasises that Peter was speaking by the Spirit. i.e. they spoke under inspiration in 2:4; and Peter addresses the crowds under inspiration
also Acts 26:25 (the Roman governor Festus confronts Paul; Paul tells him that he was speaking  (apophtheggomai) words of truth and reason (ie, also under the inspiration of the Spirit)

Acts 2:5 - “Jews” - no Gentiles here. Pentecost was a Jewish festival. God was still dealing with Israel as a special nation.
Notice who Peter addresses – v.14 men of Judea; v.22 Israel; v.29 men and brethren (re patriarch David – not a gentile patriarch); v.36 Israel

These events do not signify the beginning of the church, but there are some new things happening.

(1) Tongues (All the miraculous gifts listed in 1 Corinthians 12 were present in one form or another on occasions beforehand … but not tongues, or the interpretation of tongues)

(2) The Spirit came upon all who were faithful to God’s message. Previously, only upon ones or twos, individuals here and there, the 12 disciples, the seventy who were sent out in Luke 10. But those gifts were given to only a relatively small handful, and those gifts didn’t last. Here the Spirit was promised, and bestowed, upon all Israelites who believed God’s message concerning Christ.
READ Acts 2:38,39,41
Never before had the Spirit come upon such a mass of His people Israel … until Acts 2.
READ John 7:37-39

Briefly, there is a lot happening in this chapter that we’ve skipped over. For example:
- the quote from Joel’s prophecy (v.17-21, a quote from Joel 2), linking Israel’s restoration to the outpouring of the Holy Spirit
- the command to be baptized (Acts 2:38) – ideas linked to Israel being a nation of priests, and priests were to be washed, then anointed; ie, baptized then anointed by the Holy Spirit (we looked at some of these themes when we considered Christ’s baptism. Very similar).
- the quotes from the Psalms (v.25-28 and v.34,35)  referring to Christ’s resurrection – those Psalms in the OT each speak of the restoration of Israel as well.
- the idea of Pentecost being linked with the giving of the law at Sinai, 50 days after the Red Seas crossing. At Sinai, the law was given to the people;  at Pentecost in Acts 2, the words of God were being given to the people. All enabled by the Holy Spirit.
…….and so on.
In this study, we’ve just focussed on the events in Acts 2 directly concerning the giving of the Spirit.

Filled With the Holy Spirit

Back to Acts 2:4
v.4 “filled with the Holy Spirit”
Yet another example of where we must remember that the activities of the Spirit vary from age to age; what we read happening in one dispensation may not reflect how the Spirit works with us today. Different phrases are used throughout the Scriptures - Eg Spirit came upon people, “filled with the Spirit”, people speak of “the baptism of the Holy Spirit”, etc

In v.4, people were filled with the Holy Spirit, to the point of manifesting some spiritual activity – this time, it was the ability to speak in a language not previously learnt, in order to communicate. Elsewhere, we read of Bezaleel (Exodus 31:3), who was filled with the Spirit of God in wisdom, understanding, knowledge, workmanship. God bestowed those gifts upon Bezaleel. He didn’t ask for that filling, or need to do something to try to be filled … he was just filled. Same here in Acts 2– they didn’t have to try, it just happened; it was bestowed upon them.

Contrast this with Ephesians 5:18, which is a command:
“be not drunk with wine, wherein is excess; but be filled with the Spirit” (‘with” or “by” is not relevant for the moment)
– a command -
We are required to do something in order to bring this about. What sort of things? (Ephesians 5:19-21)
"Speaking to yourselves in psalms and hymns and spiritual songs, singing and making melody in your heart to the Lord; Giving thanks always for all things unto God and the Father in the name of our Lord Jesus Christ;  Submitting yourselves one to another in the fear of God".

Think on these things. More about them in future studies.